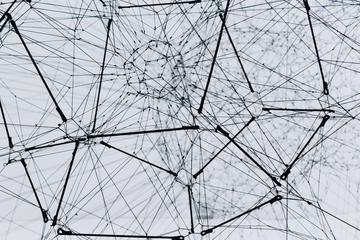 Photo by Alina Grubnyak on Unsplash

On 22 April 2021 the Leibniz Institute for Financial Research SAFE, Institute for Banking and Financial History and House of Finance, and Goethe University Frankfurt sponsored a conference highlighting current research on cross-border banking.  The conference organiser was Catherine Schenk, principal investigator of GloCoBank and visiting professor in financial history at Goethe University. She brought together academics researching current and historic international banking as well as researchers from within central banks and the Bank for International Settlements. The aim was to share different perspectives and enrich our understanding of international banking networks. The programme can be viewed here.

On the one hand, banking networks can enhance resilience by increasing liquidity and spreading risk. But these networks can also become a route to spread risk across borders.  There are several kinds of networks, including internal capital markets (among branches and subsidiaries of global banks), between different banking institutions and between banking and non-bank financial intermediaries.  These forms of relationship were all addressed in the papers at the conference, which was attended by over 100 participants from around the world.

One important outcome of the conference of relevance to GloCoBank was recognition of the need to document/reconstruct international banking networks from novel data sources. It is clear that even for current times, the full details of the global banking system on a bank-level basis are still opaque and there is still work to be done. The same is true, of course, for historical research where researchers are using new sources of archival and other data to reconstruct the global system. Contributing comprehensive historical data for ongoing research is a key purpose of GloCoBank.

Three key themes emerged from the discussion: Several papers (Accominotti, Carlson and Aldosoro) emphasized the importance of looking beyond banks to the links between banks and non-bank financial institutions as sources of stability and instability. A second theme identified different routes through which cross-border flows among financial institutions can have effects (Carlson, Postel-Vinay & Collet, Aldosoro). The third theme was the importance of the underpinning architecture of the global system through correspondent banks (von Peter), branch networks (Kisling et al) and the supporting structures of central bank cooperation (Scheubel et al., Goldberg).

The first session addressed two key historic periods: the first globalisation at the end of the 19th century and the European financial crisis of the 1930s. Wilfried Kisling (GloCoBank affiliate) presented joint work with Meissner and Xu that reconstructed the international branch network at the end of the 19th century and linked it to a comprehensive database of bilateral trade. They found that the presence of banking links promoted international trade. This finding emphasizes the role of the global branch network both as a source of commercial information for bank customers and as a way of promoting the finance of trade through internal capital markets. Olivier Accominotti then reconstructed the network of Bills of Exchange in 1906 from Bank of England archival records in a joint paper with Ugolini and Lucena, showing how global this payments system was and the crucial role played by bill acceptors. For the interwar period Postel-Vinay & Stephanie Collet found the surge of foreign capital into German banks in the 1920s led them to take greater risks through higher leverage, reduced loan quality and accelerated loan growth in advance of the financial crisis of 1931. Mark Carlson from the Federal Reserve Board identified a novel route through which the drain of capital from New York in the 1930s increased financial fragility by inducing reduction in lending for securities.

The second session addressed contemporary issues. Goetz von Peter presented work with Tara Rice that tracked the decline in correspondent banking relationships over the past 10 years, the possible causes (heighted prudential regulation, rising costs) and implications (disintermediation, more complex chains of payments). This is a particular concern of the G20 and the BIS is undertaking core research in this area. From the ECB, Beatrice Scheubel presented evidence on the Global Financial Safety Net (joint work with Engljähringer & Schwenninger) tracking the development of networks of bilateral central bank swaps, showing their growing importance over the past 12 years and emphasizing the networks beyond the USA. In her keynote lecture at the start of the conference Linda Goldberg addressed the Federal Reserve Bank swap that was initiated to respond to the Great Financial Crisis in December 2007 and again from March 2020 in response to the global pandemic. In both cases, the swaps reduced pressure on global dollar liquidity although through slightly different routes. The system has also evolved to widen access to Fed facilities through the FIMA Repo system. The final paper was presented by Inaki Aldasoro (with Huang and Kemp) that demonstrated the changing nature of cross-border links between banks and non-bank financial institutions using a network approach that highlighted the importance of off-shore financial centres. He drew attention to an interactive tool for banks’ cross-border claims in Q1 2020 hosted on the BIS website.

Two keynote lectures book-ended the conference. Linda Goldberg (Federal Reserve Bank of New York) and Claudia Buch (Deutsche Bundesbank) are co-founders and co-directors of the International Bank Research Network that seeks to bring central bank researchers together to undertake research based on micro-banking data that is of current policy relevance. Goldberg summarised a series of findings related to the pandemic crisis that may affect stability of international banking networks including the relaxation in macroprudential rules, the likely asynchronous paths to recovery around the world and the need for well-capitalised banks. Buch brought together her research on too-big-to-fail with new findings about the changing complexity of banking institutions, again demonstrating the importance of cross-country analysis at a granular bank level for understanding the sources of risk and resilience in international bank networks.